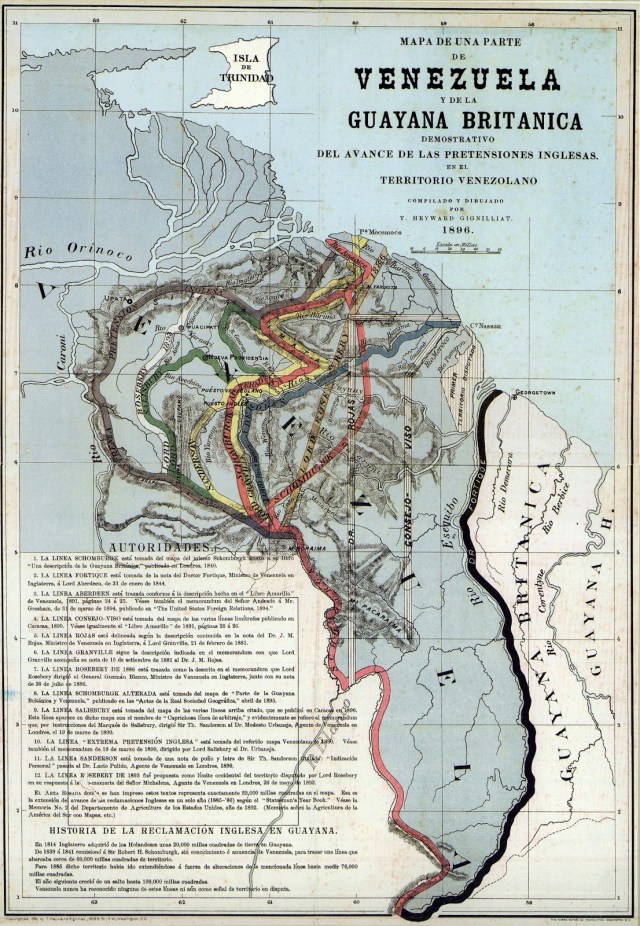 A Commentary on the Arbitral Award of 3 October, 1899 (Guyana v. Venezuela) jurisdiction ruling: The road to hell is paved with good intentions
– By Simón Gómez & Moisés Montiel

On 18 December, the International Court of Justice (IJC) ruled by 12 votes to 4 that it had jurisdiction to entertain the unilateral application of Guyana to admit the case concerning the validity of the Arbitral Award of October 3rd, 1899 and the ensuing territorial dispute between itself and Venezuela over the Esequibo territory.

How did the dispute arrive to the Court?

This dispute dates back to the end of the 19th century when an arbitral tribunal decided that the demarcation between the British Guiana and Venezuela would be drawn along the lines of the Esequibo river. A few decades later, the personal correspondence of a diplomat who participated in the proceedings- as agent and counsel for Venezuela- was made public and revealed that Frederich Von Martens, the notable Russian jurist, had been corrupted in his presidency of the arbitral tribunal, thus explaining the inconsistencies that plagued the original award.

Fast forward half a century, Venezuela and Guyana (now free from British colonial rule) find themselves bound by the Geneva Agreement of 1966. The treaty contemplates a series of mechanisms that favor the bilateral resolution of the controversy resulting from Venezuela’s denunciation of the award. Included as a failsafe, article IV(2) comprises the possibility of tasking the Secretary General of the UN to choose the means of settlement from within those contained in article 33 of the UN Charter if the parties fail to solve it bilaterally.

Naturally, bilateral negotiations failed spectacularly, thus resulting in the parties resorting to the failsafe. The choice was the selection of a Good Officer to try and mediate the differences. This, too, failed, resulting in Secretary General Guterres declaring the good offices exhausted and selecting the International Court of Justice as the next mechanism.

Guyana, acting on the intelligence that article IV(2) of the Geneva Agreement constituted, in and of itself, a compromissory clause in case of selection of judicial settlement by the Secretary General, unilaterally submitted an application to the Court asking for it to exert jurisdiction. This, despite the historical and consistent refusal of Venezuela to submit to any means of judicial settlement and the lack of bilaterally-negotiated special agreement.

The decision rendered by the Court on 18 December merits deep scrutiny in that it pushes the reach of the Court’s own jurisdictional capabilities to worrisome extents by finding that the Geneva Agreement enabled the Secretary General to choose the means of settlement if the parties to a treaty failed to solve the dispute bilaterally, and that such a choice is binding upon the parties without the need for additional confirmation, until the controversy is resolved.

The problem is that the Court understood that it was tasked with resolving the controversy because the Secretary General chose it and therefore the consent of Venezuela, which was a no-show during the proceedings because it has historically and consistently rejected the recourse to judicial settlement on the issue of the validity of the Award, had to be forcefully inferred from the delegation made by the parties to the Secretary General. Otherwise, the Court argued, the controversy would remain unresolved and the object and purpose of the Geneva Agreement would be defeated.

In other words, the bench saw in the delegation of the choice of means to the UNSG, an implicit compromissory clause and decided it constituted sufficient grounds to infer Venezuela’s acceptance of the jurisdiction of the Court. Needless to say, such a conclusion has the potential to cast a new light on all other treaties containing a reference to article 33 of the UN Charter, or strike fear in the hearts of States that have an outstanding international dispute they do not wish to see submitted to the ICJ.

In the case under analysis, it is clear that the will of the parties was to have at their disposal a variety of methods to solve the dispute. The failure of bilateral mechanisms and of the subsequent good officers appointed by successive Secretary Generals in no way warrants the Court to dispense with Venezuela’s acceptance of its jurisdiction.

The Court has been adamant in the past that it must be satisfied that both parties of a case have unequivocally consented to its jurisdiction, even if that acceptance need not observe prescribed formalities.

In the matter at hand, Venezuela submitted extrajudicial communications to the Registrar to inform the ICJ that it did not grant jurisdiction to the Court and that it would regard any attempt to exert jurisdiction as an overreach. Traditionally, the limit to any implied powers an international organism may have is to be found in States’ protests. Seeing as it is precisely the will of States what gives way to the powers of a given body, it stands to reason that the powers of said body could run counter to the very thing that enabled them in the first place.

However, the question lingers: why did the Court, risking ultra vires and the departure from its own established practice, avail itself of a semantic sleight of hand to assert jurisdiction instead of taking note of the refusal by Venezuela and dismiss the case?

The answer, as the ruling suggest, is that compliance with the object and purpose of the Geneva Agreement demanded that the ICJ assume jurisdiction because otherwise, the dispute would be left unsolved. The Court failed to see that the treaty contemplates that possibility, which would lead to the exhaustion of the treaty and its ex officio termination.

What the Court did not seem to understand is the alternative: that all the means of settlement could be attempted with the dispute remaining unresolved. Judge Bennouna, in fact, posed this very question to the agents of Guyana during the preliminary phase public hearing. The Guyanese, keen on judicializing the question, answered in the negative. They estimated that if recourse to adjudication occurred, there was no way the controversy could remain unsettled. In that same spirit, the Guyanese reply to Judge Bennouna’s question pointed out that the Geneva Agreement provided the means to resolve the controversy and that its stipulations would enable a definitive solution.

While correct, said vision does not forcibly entail that every individual mean included in the agreement has the capacity to definitively settle the issue on its own.  These solutions are, after all, bilateral in nature. The fact that alternative solutions are contemplated indicates the foreseen potential fallibility of every one of them. In this context, Guyana’s reply was at best shortsighted, and at worst, an attempt to surprise the Court in its good faith.

If then, the Geneva Agreement contemplates the possible failure of the mechanisms of the UN Charter, can the Court’s reasoning concerning its duty to assert jurisdiction because the Secretary General chose it and because the treaty so mandates be held to be good law, or at least an admissible interpretation?

As Judge Gaja pointed out in his dissenting opinion: this is not the case. He reasons by analogy that recourse to arbitration would require the parties to convene on the terms of an eventual arbitral tribunal, even if the third party chooses that mechanism. This is the equivalent of the need for explicit grant of jurisdiction to the Court.

The notion that an arbitral tribunal could grant itself jurisdiction is of course worthy of derision (sans prejudice to the kompetenz-kompetenz principle which operates when the arbitral tribunal has already been validly created). No less laughable would be the proposition that a third party could replace its principals in the design of the competence and rules that would reign the arbitration.

If all this is true for an arbitral tribunal, why should the ICJ be exempt from respecting the sovereignty of a State that rejects its jurisdiction?

It is clear that the Secretary General had the power to choose the means of settlement, and consequently, Venezuela has an obligation to go to the Court. But it can only do so in the terms it sees fit, and out of its own volition. These are two separate steps which must be subsequently fulfilled for the Court to have jurisdiction.

This would have allowed for the parties to bilaterally convene a special agreement to grant jurisdiction to the Court. However, the privileging of the Court of the “object and purpose” over the usus loquendi in its reading of the Geneva Agreement led to a conclusion that violates not only the sovereignty of Venezuela, but the Statute of the Court itself, while ignoring the actual text of the agreement that purportedly gives it jurisdiction.

The Court should have foreseen that good intentions are a poor substitute for proper interpretation. Indulging in Quixotesque interpretative quests at the expense of State sovereignty is inadmissible and it is also a disservice to its mandate, lest it finds itself with a substantially reduced clientele going forward.

Originally posted on “Opinio Juris” and reposted in our website with the permission of the authors.